The beginning of 2023 is overflowing with powerful, loving vibes. If you’re single don’t go rushing off at the stroke of midnight on New Year’s Eve, expecting to meet your Prince Charming! He may not appear to you until the wee small hours of the morning on January 1st or later on in the month.

Fun, spontaneity, and emotional warmth await everyone on this festive holiday, so make sure you’re surrounded by people you care about, or going out to a party where you can meet new people

Personal and social developments are in a sense – never fully concluded in one lifetime. Life is a big river, and mostly we can only see much later which events and decisions were activated for the subsequent path. It like skimming a rock across the top of a lake and watching the circles, but never knowing their depth. Nevertheless, in 2023 we will still have to find answers to the important questions of our lives and times. 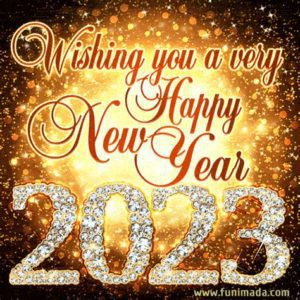 This year, we will be dealing with completely new issues, because in March, at the Spring Equinox, Pluto enters Aquarius for the first time since its discovery in 1930. Saturn also changes zodiac signs at the Virgo Full Moon on the 7th, moving from Aquarius into Pisces.

But the year 2023 begins with a rather intense constellation right away: Venus and Pluto are in conjunction on the last degrees of Capricorn on January 1st. Mars and Mercury are retrograde, and the Sun squares Chiron a day later.

Perhaps it’s just the aftermath of exuberant New Year’s Eve celebrations, but we also need to have a serious talk about desire, about money, security needs, and about wishful thinking and reality.

However, the serious mood takes on a more relaxed note as early as January 3rd, when Venus enters Aquarius. Unexpectedly, creative solutions could now appear as if out of nowhere. Dare for once to experiment with an uncertain outcome, because it could be well worth it.

A motivated can-do attitude prevails early in the week, making it an excellent time to set your New Year’s Resolutions and get new business or creative projects off the ground. Everyone is flexible, open to new ideas, and willing to try new things; Especially on January 5th, when the Capricorn Sun trines Uranus in Taurus, you can surprise yourself and others with unconventional solutions.

Careful now! The energies grind to a halt at Friday’s Full Moon in Cancer. This ushers in a weekend that could be full of suspicion, power plays, manipulation, and some hurt feelings.  If any drama begins around you, try to remove yourself as soon as possible and don’t give in to the energies.

As for world events – it’s possible that scheming people will be revealed when the truth about their past actions are revealed.

Recieve weekly news and inspiration in your inbox.